Hartlett is a great example as to why we should expect to get hammered.

A semi professional player who is not match fit who is about to play professional footballers who have been through an elite preparation for months.

Unfortunately the only way he will have an influence on this game is if he does what he has done so often in the past ie be aggressive OFF THE BALL.

Don't think Norwood went into the first game of the year thinking Port was anything more than another team to beat.

Hartlett is a great example as to why we should expect to get hammered.

A semi professional player who is not match fit who is about to play professional footballers who have been through an elite preparation for months.

Unfortunately the only way he will have an influence on this game is if he does what he has done so often in the past ie be aggressive OFF THE BALL.

Don't think Norwood went into the first game of the year thinking Port was anything more than another team to beat.

That's exactly how WE have to look at it, plus we have an extra 4 day break over them.
We spoiled there last game at Alberton last year, so let's do the same again.

wolves wrote:Happy to be wrong and then rush down to the club for a beer to celebrate

You may well be correct but it's about supporting your team. You seem to be passionate about the club so suck it up and get out there.

Agreed, if we all took that approach wolves the players wouldn't have a supporter there. And given your position at the club shouldn't you be setting a better example? You'll probably feel better if you go and barrack against them anyway.

I'll be at the u 16 and u18 games at richmond as I promised to attend some junior games when they aligned with holidays and since many u16 games are in direct competition to my kids footy games during the school term, this provided the first opportunity for me to look at our future players and give feedback at full games - I have attended two U16 games and 3 U18 games for parts of the games.   I was very outspoken before and still am about power and crows being allowed in the sanfl - But moreso with Port having extra teams and being allowed to play at home and my pov has not swayed.

Watching PAFC juniors is also of interest as some of these players will be clubless next year. So me not attending the league this week at Alberton offers an opportunity to see who may be available for recruiting 2015 as well as sighting potential WAFC juniors for discussion at board level. We know that zones will change next year and Port players will be effected.   So i get to stick to my principles and not attend Alberton adding to the Port Coffers and still watch WAFC and have a beer at our club - hopefuly another after the 18's finish and our league cause an upset as canvassed by many posters.

Hope this is agreeable and would welcome anyone not going to Alberton to come to Richmond and joint me watching our youngsters and give a perspective on players I might not see.

Wolves....Anyone willing to invest their own time and effort into the WAFC in any capacity has my utmost respect. I am sure a lot of like minded supporters agree.

I desperately hope we can get over the line this week but the odds are really stacked against us. This could be a season defining game. 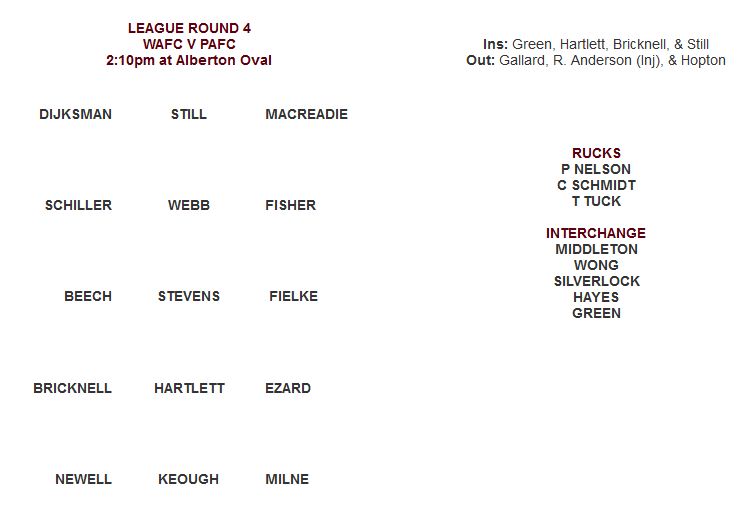 Reserves.. strange to see Silverlock named in the reserves and named as one of the interchange players in the league, looks like he's been dropped. 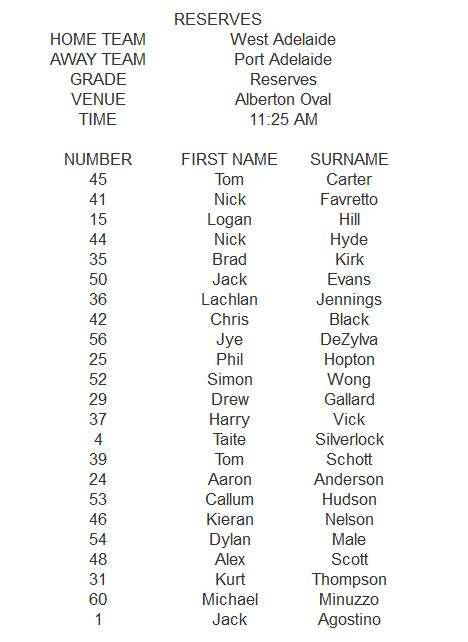 Tuck not named as an in but named in the side

Yep good tactics trying to confuse our players and it's working.


R. Anderson is out injured.

Another dismal quarter in the 3rd term, a lot like last week.
Very poor goal kicking yet again.

A long season ahead on the evidence so far.

Went to the match today knowing full well we would get thumped and so we did.


I doubt I will go to another match involving the Port Magpies. To listen and see the Magpie fans cheering on players such as Stewart and Hithcock was a complete joke.


Players such as Stewart,Colquhoun,Logan,Hitchcock,Summerton being paid $400.00 a game as captain as well as Andrew Moore who spent many yrs playing for North just made me think what a compromised SANFL compeition we have.
How the SANFL could allow the Magpies to have top up players from their Magpies side LAST YEAR is behind belief.


HEAVEN HELP THE SANFL IF THE MAGPIES WIN THE SANFL

Yep  when you have 14 AFL listed players & 2 Rookies

Exactly right Scorps, 16 AFL listed players today. I know it was agreed to but this is ridiculous.
I guess they're  in now (although if I had my way they would be out) but changes have to be made. I'll never go to Alberton again with those conditions intact.
How hard is it to give us sh*t when it's a team of professionals playing semi professionals.
Whoever negotiated those terms should be hung and quartered.
As for the furphy "They'll get injuries so become weaker as the season goes on",well we will  get injuries too and our list isn't as deep as theirs.
As you can tell I'm pretty hot,being a Westies supporter I can take a loss but do not accept them as readily under these circumstances.

Last week we were level at half time and north killed us I  the second half
Seems to be a problem in all grades but I suspect much of this is due to the injuries and player playing up before they are ready.
I also hate how the magpies pretend to be the same club - They are 3 years old forming in 2011 when they United with the power
something has to be done or attendances for real sanfl clubs will fall further as people become disillusioned with all interfere sport must go

One thing I got a buzz from yesterday was 7 players between port and wests U16/U18 sides I coached at St Michael's College in the Yr7 A side. I must be getting old!

I really liked the look of Harrison Hawkins (PAFC U16) and Isaac Johson of our club in the U16's. Inglis Rodman and Crump were good for westies. In the 18's, Aaron Francis will be drafted next year; Nick Thunig has potenital too. Tuck does some sensational things but also lets himself down with unexpected errors. Bonner out wide is good. Turner, Watchman and Ferraro were good in patches too - Not sure how the club voted awards as I went home crook as soon as the game ended.

Why don't we amalgamate with kilburn maybe they can help us.

At least they are authentic

While the result wasn't good yesterday I thought we had some very good passages of play. Some of our quick ball movement was great to watch and gives us some hope for the next few weeks.
Good to see Newell, Milne and Stevens get better each week. All played very well.
Turnovers killed us.
M.Still kicked some great goals from hard angles with ease.
Lets beat Centrals and get off the bottom.

Not being at the game, what was the reason our skipper didnt play?

Not sure if true but heard he was in hospital with heart palpitations yesterday morning. Was at the game though.