You didn’t have to be mad to go to the footy tonight but it would certainly help. A cold and wet Friday night with a slicing south west wind made for atrocious conditions at Richmond Oval but 1300 brave souls came out to support their team. Most would have gone home wet and cold but 1295 Bloods fans also went home happy.

In a tight, tough and desperate slog of a game Westies ran out deserving winners by a single goal, 5.11 to 4.11.

Homburg came into the team for, I think, his first game of the year. This was a smart move as it was not a night for the talls. Milne and Hardy started back, Webb at FF and Nelson in ruck. Thankfully Porplyzia didn’t start for them saving us the sight of one of our own playing against us.

Kicking to the northern end the Crows started well and at Q time had 2.2 on the board to our pathetic 2 points and it looked like another Norwood game. But in the last 3 Qs we kicked 5 goals while the Crows managed just 2. Slowly we gained the ascendancy through some strong and committed footy. We played more as a team and the Crows became frustrated.

The ball spent a lot of time in the Crows forward line and we seemed to goal from quick breakaways by kicking long down the centre. We went inside-50 38 times to their 47 to demonstrate the point. We dominated in the air taking 71 marks to their 48.

The last Q was 28 minutes long and seemed to go on forever with us clinging to a narrow lead. When Callinan goalled at the 20 min mark we led by only 5 pts. The next 8 minutes saw furious defending by both sides and a solitary point to us before the siren finally sounded. Special mention to a magnificent spoil by Riley Milne to save a certain mark in front of the Crows goal in the final minute.

The umpiring clearly favoured the AFL reserves team and it was just as if they were looking to suck up to them so they could, themselves, get into the big league. Two players wrestling in a marking contest – free to the Crows player. Pack develops, free to the Crows. Considering the conditions the game was over-umpired, for example, 13 frees were paid for ruck infringements..

Despite the appalling conditions we witnessed 2 great marks, both to West players. Think Robin Van Persie’s header goal in the first game of the World Cup and you have a picture of Shannon Green diving horizontally to take a great grab on the NW flank in the second Q. This demonstrated how we were prepared to win the footy at all cost and how we were able to win out against a side that was not quite as desperate. Then early in the last Daniel Webb took a screamer in the goal square, wet ball and all.

This was a pretty even team effort and it was hard to pick best players – you could hardly see them anyway! Conditions were made for the tough nuts and Green, Tuck and Ben Fisher went in and got the hard ball all night. Fisher kicked 2 of our 5 goals. Schmidt, Stevens and Beech all played well.

In the last 2 games we have beaten both AFL reserves teams. As good as the win was against Power this one was right up there.

Spot on Blackandred. Again like the first meeting West won because they were prepared to go for the hard ball more often. The Crows have a different agenda. Also like the first meeting the supporter numbers for them was practically non existent. What a load of crap the SANFL clubs were sold. How stupid were our leaders to buy it? I long for the day they wake up and kick the AFL reserves out of our comp. But for now at least for the rest of the minor round we only play true SANFL opponents. On a brighter note was good to see Fergy in his Bloods sweater at the game. Spoke to him and wished him well in Melbourne. One of our club legends.

1. That first quarter of football was the worst, dumbest football I have ever seen.
2. Next three quarters where good old fashioned hard slog football.
3. Once again we looked crap kicking the ball sideways and looked good kicking it forward. If you cannot kick it 30m sideways in the wet and hit a target then bloody don,t. New team rule.
4. Lost the hitouts and the clearances.
5. Did we get one or two reports for the match.
6. Marking on the chest should not be that hard.
7. Hardy slowly getting into it each week.
8. That kick by Stevens will go down in history as the worst kick in SANFL history. Great game though.
9. Well done to the people that turned up. I don't think I have ever been that wet before.
10. Lets smack Centrals next week.

Great effort by the BLOODS to record back to back wins against the two AFL sides in attrocious conditions.

There were no reports, ST.

To make the five, we will need to win 5 of our last six now that Souths beat North factoring in % as a game to south.

We are good enough to do it too.

The draw makes it possible and we have yet to play South at home.

I will take grit and determination over skill anytime.....

Well done MM and the boys.

With our inconsistency surely we need to take one game at time ....I for one can't even contemplate finals!!!!

Our only hope is to make 5th spot, we have to win 2 more games than South on the run home +  percentage. Don't think Norwood will lose too many more as they are getting it together again.

The ladder as it stands after round 12... 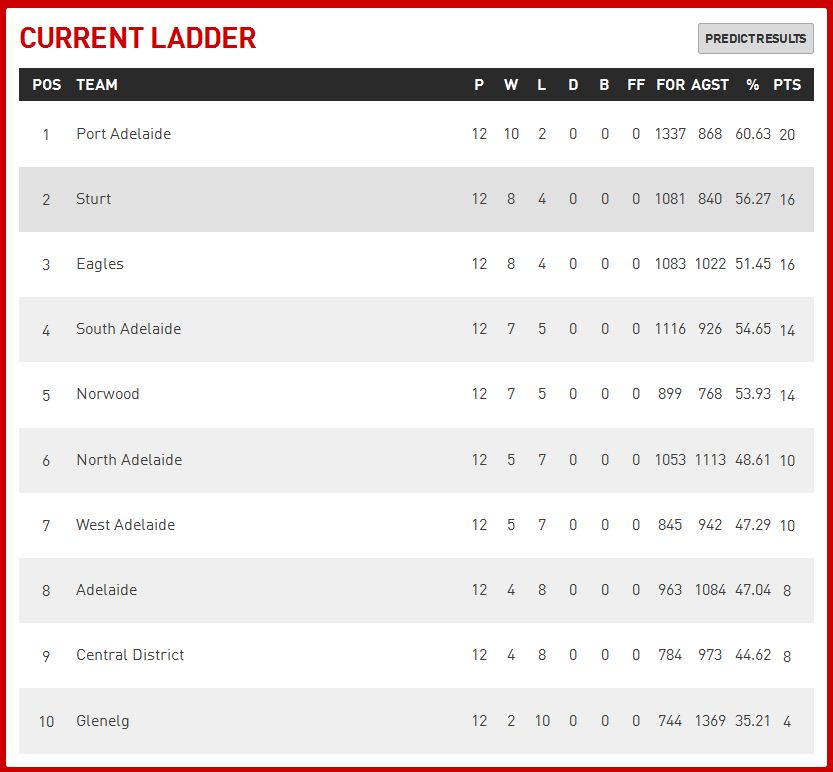 Couple of good marks on the highlights. I hope Webbys mark was a contested one.

If it wasn't for Milne in the dying seconds of that last quarter , we would all be having a different conversation about the game, as much as I think it is fantastic that we have won in the last couple of weeks, we are still playing to much inconsistent footy to be even talking about finals, I for one do not want to be there just to make up the numbers, we all wont to be there to win