Norwood Oval is the venue

Please note for those attending, the SANFL have provided all SANFL clubs with a set of new jumpers just for this format of fast footy, players you may recognize might not be wearing their original number.  Also when you see a team wearing a grey jumper with a red sash, that's us

Also we might have to wait a few hours after the Saturday game to find out if we play in the finals later that afternoon. Depending on if we have won any of course. 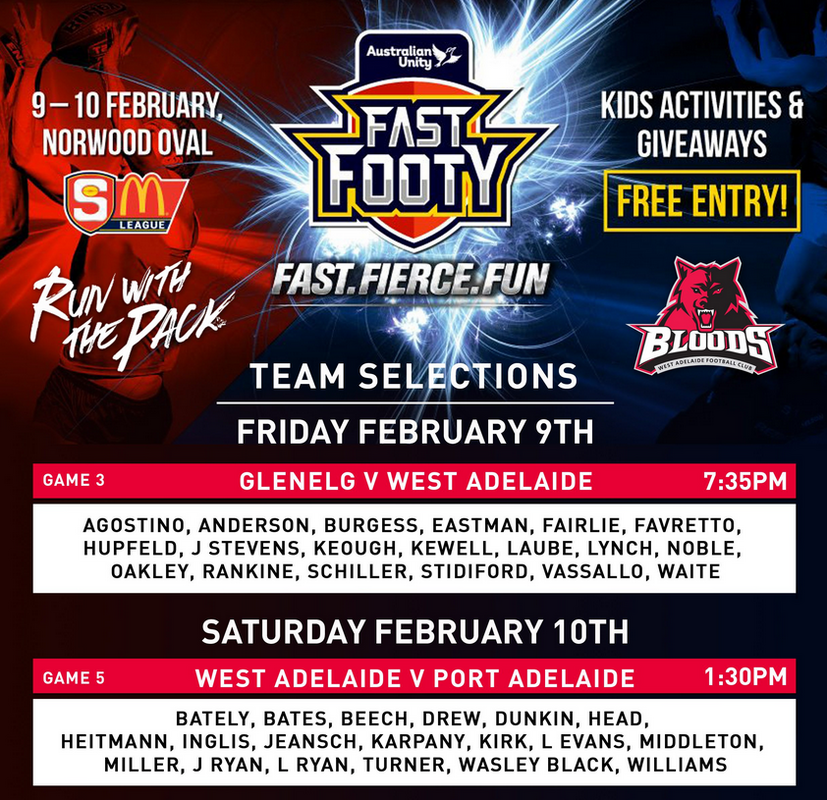 I think our constitution actually requires us to wear red and black.

Well done to Gav and the boys for the 1st preseason hit out. Was impressed with our level of fitness at this stage. Good luck for game 2. Go Westies!!!

West Adelaide bounced out of the blocks to hold off Glenelg by 29 points in Game 3 of Australian Unity Fast Footy.

Coming on top of a Super Goal to NSW recruit Matt Eastman, Keough’s dominance would have been a nice element for Bloods fans to take out of the contest.

Glenelg worked its way back into the match with four majors in the second term but it wasn’t enough as talented Bloods teen Izak Rankine put the icing on the cake with two classy goals.

The second of which produced a memorable celebration, when Rankine produced a back flip after converting his set shot.

Ian Milera proved to be a livewire for the Bays up forward, booting two goals, including an impressive intercept on the 50m arc.

Due to ill health i watched the game on youtube which was a different experience in itself.

Totally endorse bloodsfireup comments as it was a quality win for gavin and boys. Thing that most impressed me was i felt that the attacking use of the ball and accuracy of kicking has shown strong improvement over summer period.

General views on the game itself,

Game 2 is at 1.30 v Port, then we have to wait around for all the other games to finish to see if we play finals later tonight.
A very small crowd in attendance, looked around the 1,200 mark (if that) and i think the SANFL would be disappointed.

FB probably biggest question is was there no injuries apart from normal soreness.

Oldfella wrote:FB probably biggest question is was there no injuries apart from normal soreness.

Thanks Oldfella, it was difficult last night in steamy conditions with not having much time time to enter the change rooms which were the old ones under the main grandstand, we had to wait for the Eagles to clear out and then had 40 minutes to set up, it was all hands on deck to get players strapped and warmed up. No injuries from last night that i know of. When they say FastFooty, that includes property and medical staff as well.

It seemed to me that it was a good hitout and we looked in good nick.

New recruits, Lyndon Hupfeld and Matt Eastman looked promising. The modified game suited Murray Waite and he was good, along with several of our more experienced players.

Tom Keough actually kicked 4 goals in about the first 6 or 7 minutes, then played the next quarter at the same end of the game, in defence.

Players, apart from midfielders, had to stay in their zones, so take that into account when considering goalkickers, etc.

I know it doesn't mean anything but it's still nice to get a win in the first half of the year for a change.

Any report or score update from game 2 v PAFC

Wish i could be there.
Go you bloods

Aldo, your words are correct --- preseason game of no importance except fitness and coaches viewing players but a win is a win.

Allowing for that even better early news

Cheers to you bessie

Thanks oldfella
If we can pick up som $$$$$ even better

Link for scores and for goal by goal update

Lucky Bundy didn't post this he would have been banned for life.

Nice try mate hut did not win a prize  --- nothing in the comment about west adelaide or any west adelaide player coach official or employee.

Bundy would not be banned for this